I was recently contacted by a young lady by the name of Lisa Barrett. She said that she was a descendent of Maria Rosa Villalpando. Apparently three-fourths of New Mexico is related to our clan. She had also said that she had spoken to Tom Martinez (Tommy) and that she would like to talk. I was excited. Of course, with my schedule (and I’m sure her schedule is just as busy) a few days had passed. But I kept thinking about her. So, as soon as I could, I went back to the blog to send her a note asking her to contact me by email. On the blog, I had a message from her asking me to contact her. I laughed and thought we were on the same wavelength.

I had a quick email conversation with her and then she asked me if we could have a phone conversation. We set a time for the following Sunday. I was sitting at a baseball game, naturally, and pulled out my phone thinking I would write to her and find out a good time and she had already written to me. We really were moving in harmony.

She said her ancestor was Ramon Jaquez. Now that name meant something to me. I knew Ramon Jaquez was a full brother to Juan N. Jaquez.

Here we find Juan N. on the 1910 census, living next door to Ramon Jaquez and his family.

Juan N. as you will recall, is my dad’s grandfather. Now, I can tell you how Lisa Barrett fits in and what she was researching. Jose Ramon Jaquez, Lisa Barrett’s direct ancestor, was born on November 8, 1960 in San Luis, Co. The Jaquez clan traveled back and forth between New Mexico and Colorado regularly. I found them on the 1860 census here:

As you can see, Jose Eusequio is listed as age 31, wife Francisca Vigil is age 28 and their children are Victoria, age 5, Juan N. age 3, and Josefa, age 9 months old. I would suspect Francisca is pregnant with Jose Ramon since he was born in November of this same year.  This census was taken in the Taos Valley, NM.

This is from the 1870 census and now we see Juan N. age 14 and brother Jose Ramon age 10 living together.

To continue, Jose Ramon Jaquez marries Trinidad Maria Munoz on October 18, 1882 in El Rito, Rio Arriba, NM. The census shows they had 15 children. That is a big number in my book. It makes Celestino Jacques and T.S. Archuleta’s families of 12 children look paltry.

I am going to concentrate on their son Longino Jacques, but before we get to him, let’s look at something else.

On the left side of this photograph is Ramon and Trinidad Jaquez. The couple in the middle is Tobias and Luisa Jaquez. Tobias is the son of Ramon and Trinidad, a brother to Longino. The couple on the right, they are Benina and Maclovio Archuleta. Of course, we’ve already met Maclovio and Benina Archuleta in my blog post entitled “Ricardo de Jesus Archuleta” as Maclovio is the brother of Ricardo Archuleta. Round and round we go, Jaquez to Archuleta and Jaquez again. Tough to follow, I know, and a little dizzying.

Anyway, I thought it was a great picture and a fun sidetrack but now back to Jose Longino Jacques.

This picture shows it was taken in the 1920’s and it is Longino along with his brother Tomas Jaquez.

A second picture of Longino Jaquez.

So looking at the list, Eugenio Matthew Jacques is Lisa Barrett’s grandfather. I switched the spelling of his name as Lisa sent me a copy of a list she had made of her aunts, uncles, mother and her own children. That is how she spells her grandfather’s name. Funny, my own birth certificate is spelled Jacquez and my parents changed the spelling when I was in elementary school to Jacques. That is how I spelled my son’s name.

So Eugenio Jacques was born on February 15, 1918. He married Eginia Valdez and their daughter is Mary Louise Jacques. If you look at my Facebook friend list, Mary is listed as Mary Hill Schimmels and she is my (or if you are in my generation…lol) 3rd cousin, in case you want to say hi to her.

So, back to my conversation with Lisa Barrett. She lives in Elko, NV and is my 3rd cousin, 1x removed.  She is very interested in ancestry and was researching Maria Rosa Villalpando and our collective history. Her family had a small party and she had Tom Martinez speak to her relatives about research. She said they had a lot of questions. We all do.

I think you get the most benefit from doing the research yourself. When you find a document that pertains to your ancestor, pull it out and really read the entire document. Write down all of the pertinent information and contemplate what it means to you. The help of other researchers such as Tommy Martinez are invaluable. You may have questions about where researchers get their information. Ask questions. Question everything. Look for the proof.  There will be always be debate about proof, even if you believe information that others have found. Happens to me all the time .

Lisa Barrett would like to meet up at one of the Jaquez family reunions. Since our phone conversation lasted for an hour and a half, I think we would have a very good time together. I see New Mexico in our future.

I know that I am not the only person to have to face ancestor stories that aren’t very pretty, and in fact, some are quite messy. To say Jose Eusequio Jaquez’ story is a bit of a mess would be appropriate.  His family could have had the 19 Kids and Counting show (I think!) Ha, well, dive in.  Let’s see if we can untangle this a bit. Now he is the father of Juan Nepomuceno Jaquez, my dad’s grandfather. My father had only warm feelings and great respect for Juan N. 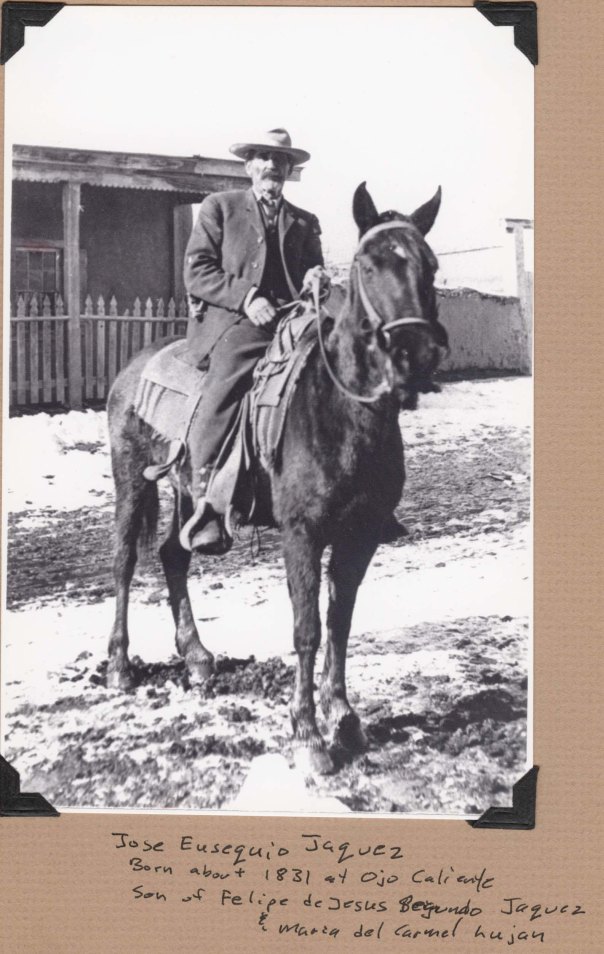 To say he was a prolific progenitor would be putting it lightly. But we’ll get to that later. Jose Eusequio was born in approximately 1831 in Ojo Caliente, Taos, NM to Felipe De Jesus Jaquez and Maria Del Carmen Lujan. We don’t have a lot information in regards to his early life but on January 22, 1954, he married Maria Francisca Vigil. They were married at the Our Sorrows Parish in Taos, NM. I don’t think that is the best place for the beginnings of a marriage. #justsaying

Anyway, in 1860 Eusequio, age 31 and Francisca, age 28, live in the precinct of Culebra in the Taos Territory of NM. This census was taken on July 18, 1860. Their children listed at this time are Victoria, age 5, Juan Nepi, age 3 and daughter Josefa, 9 months old.

His children with wife Francisca are:

Now, since Joe Eusequio isn’t listed on the 1860 census, I am thinking this one died as an infant. Also, Jose Ramon isn’t listed on this census because it appears that Francisca  was only three months pregnant with him at the time the census was taken, as he was born in November of 1860.

The last child I believe to have been born to this couple was Gertrudis Jaquez. Her date of birth is 7 May, 1863 in Conejos Co., Colorado.

It sounds like Maria Francisca either died during Gertrudis’ birth or shortly thereafter.

By the 1870 census Jose Eusequio has remarried.

In 1864, (only one year after his wife’s death, but with six small children, I can understand that he needed help) he married Antonia De La Luz Ortega. She was born in 1841 so she was near his age and it appears she was married before she married Eusequio in 1864. She was 23 years old and by the 1870 census, they lived in Costilla in the Colorado Territory. Living with them were

Looks like Eusequio is age 9 now, so maybe he survived after all. Not sure why he wasn’t on the 1860 census. Could be a mistake on the census taker’s part. It happens. Anyway, Antonia De La Luz Ortega took up where Francisca left off: having babies.

The first two children could have been from the first spouse, so my guess is that his natural children start at Teofilo, but I am not positive. So, Antonia would have been 48 years old when she had her last child. Not unheard of but sheesh! That is a hell of a lot of kids. Made my head hurt trying to keep everyone straight. So Juan N. was one of six children between his father and mother, then he was a half brother to 13 more siblings, 19 all together.

This is Antonia De La Luz Ortega in the middle of this picture.  Also in this picture is Patricio Jose Jaquez. He does look a great deal like Juan N. to me (I believe them to be half brothers).

Also in the picture are his wife, Delfina Cordova and their adopted daughter Juanita. The last person in the photograph is Bernadino Valdez. The bottom of the picture says that he is called as Patricio’s father. Not sure who he is or why it says this. Could she have had an affair? I guess so. Could he really be a Valdez and not a Jaquez? Yikes, no way to be certain.

I found the 1910 Census and found them living in Costilla, Colorado. He is listed as age 32, she is 26 and Juanita is age 7. It appears that this is when this photograph was taken as well. This would make Antonia De La Luz Ortega Jaquez age 69. Wow, she’s really aged from having all those children.

This is a picture of Ysidora Maria Victoria Jaquez and her husband Jose Victor Trujillo. She is a full sibling to Juan N. 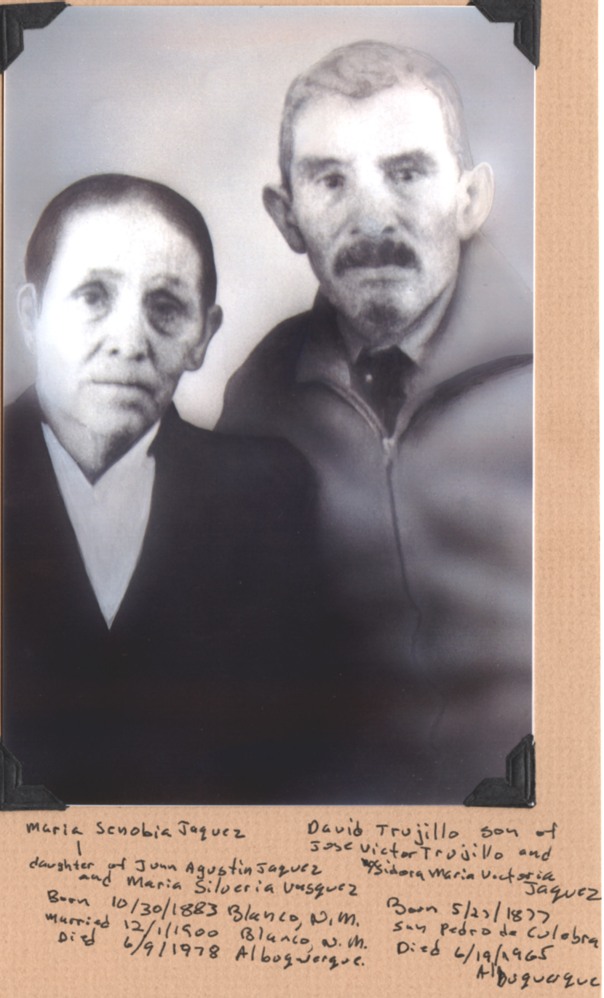 This is David Trujillo and his wife Maria Senobia Jaquez

David is the son of Victoria Jaquez Trujillo and Victor Trujillo.

Oh yes, of course, not only are we related to David Trujillo, his wife is related to us by blood as the daughter of Juan Augustin Jaquez.

This is Juan Augustin Jaquez and his wife, Maria Silveria Vasquez.

Alright, people, move along, nothing to see here. I am certain your family twigs look just like this. Well, fairly certain. Fine, there’s lots to see, much to understand.