My grandmother was such a powerful force in my life. She was a hard worker from the time she was a young girl. She worked in lots of office jobs and in the credit department of a store. She used her initials so that no one would know she was a woman. Flora also had a gift. She could talk to anyone and everyone. Eventually, she went to work for a vitamin company. She left that company and went to work for Shaklee Corporation. She was sued by the company she left because the company knew they were losing a good saleswoman. Flora showed up to court in a housecoat and the judge had a hard time believing this was the person that companies were arguing over. 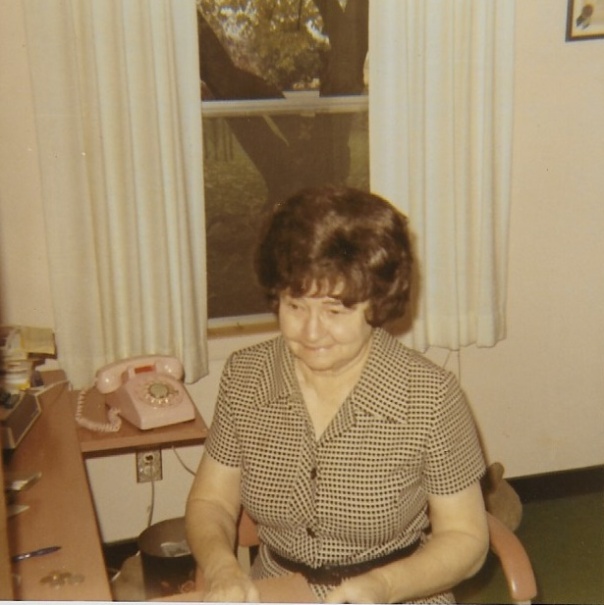 Dr. Shaklee ran his business by the golden rule, “Do unto others as you would have them do unto you.” This was a rule Flora lived by. When Dr. Shaklee honored Flora during a convention, Flora arrived on the stage wearing a beautiful red gown. He said she was wearing red and was always out scratching for business. Right there, he affectionately called her his “little red hen.”

Shaklee Corporation sold vitamins, diet and health products, along with all natural cleaning products. Grandma Flora became a driving force in the company. Dr. Shaklee started selling products in 1946 and by the 1950’s, the company was close to going out of business. Dr. Shaklee credited Flora as being the crusader who changed the course of Shaklee history.

Dr. Shaklee was trying to keep the business going and worried about paying bills. Flora said, “Those bills are going to be paid.” That month, she went out and sold half the company’s business. It had never been done before and has never been done since. My mother used to say that if Grandma got on an airplane, she would have sold to five different people and have three more wanting to sign up to be a distributor under her. She worked her truth and believed in her products with her whole heart. It was easy to see why she was so great at spreading her message.

Dr. Shaklee said that, above all, Flora True stands out as the leader of all other salesmen.

Flora earned the first car that was ever given away. It was a 1956 Chevrolet Bel Air.  She said it took her one month to earn that car. She earned a new car every year.

In 1981, Shaklee Corporation celebrated their 25 Anniversary with a Golden Jubilee. They paid to fly my grandmother, my step-grandfather, my mother and myself to San Francisco from our home in Stockton for the celebration. My grandmother had been ill but was determined to  make it to the ceremony.

The next year, on the occasion of Grandma Flora’s 80th birthday, we held a celebration in Stockton for her.  Dr. Shaklee and Dorothy came to Stockton for Flora’s party, along with the rest of her family. It was the last birthday the Little Red Hen would celebrate.

After her death, Flora’s reputation continued at the Shaklee Corporation and eventually, an award was established in her honor. They invited my mother Jubie and my Aunt Kay to attend the ceremony in Montreal, Canada in 1984. They were presented with the first award

Because we had grown up with the Shaklee products, my family had continued to use them. My father used Basic H (as a floor cleaner and a shampoo, because, you know, why not?) and so I needed to replace his bottle of Basic H and I simply looked up a sales associate in our area, called her up and went to retrieve the bottle.

When I arrived at her home to pick up my product, the lady gave me the Basic H and we spoke for a few minutes. I told her my grandmother used to sell Shaklee products and that perhaps she knew her? The lady assured me that she didn’t know anyone in the business as she had only been in Shaklee for a few years. I said, “Oh, my grandmother, Flora True, used to sell here in town.” The lady starts shrieking, “Flora True? Oh my god, are you kidding me? Never in a million years did I think when I got up today, I’d be meeting Flora True’s granddaughter.”

Haha, I didn’t realize being related to Flora was that amazing. I don’t think we really appreciated how they felt about her because she was just grandma. We knew she was an amazing person, but it was so nice to have others think of her in that way as well. I cry every time I watch the video of her, because it is such an accurate reflection of who she was, even though she was already very ill. She was damn determined that she would walk across that stage, and she did.

P.S. The picture of the Shaklee building was provided by and used with permission by the Dr. Forrest C. Shaklee Facebook page.