John H. Bennett was born on July 4, 1870 in New Harmony, Utah to Nancy M. Taylor and George Bennett. It is important to understand the circumstances under which he was born in order to appreciate who he was. I am not a member of the church of Ladder Day Saints and the only information that I knew was that my mother-law’s family were LDS but didn’t realize that my father in law’s ancestors were, too. John Harvey was Grandpa Bill’s father. We know that Grandpa Bill was born in Canada and retired in Utah.
I did not appreciate how closely his ancestors were tied to the beginnings of the LDS church. It is difficult to tell his story and leave out the church so I will include bits and pieces so we can make sense of his life. My children often say the people who lived a long time ago aren’t our family. However, without those ancestors, my children would not exist. That is huge to me. There is an Ancestry.com card that says “If you don’t know your history, then you don’t know anything. You are a leaf that doesn’t know it is part of a tree.”
Okay, lecture over.
John H. Bennett’s story really begins with his parents. His mother Nancy M. Taylor and father George Bennett were born in Leyland, Lancashire, England. His father was born October 10, 1810. They first heard of the Mormon Church after the first missionaries arrived in England and they made plans to join the Saints in Zion. They left England in 1841 to many trials and tribulations. They arrived in the Salt Lake Valley on October 10, 1852, five months after the arrival of Brigham Young. 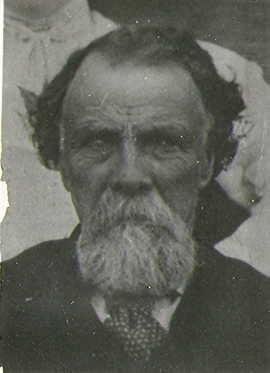 John H. was the fifth child born to his parents. His father had been called to assist in opening a town called New Harmony. While living in a log house with dirt floors, a dirt and straw roof and no windows, John was born.  When he was six, the family moved back to Kaysville. Interesting to note that George Bennett had more than one wife. His second wife was Sarah Bennett.
When he was a boy, John was expected to work in the fields and help with the stock. At nine years old, he was left in charge of a large flock of sheep and lived in a camp wagon, moving the heard to greener pastures, as necessary. It was a lonely life for a boy but he accepted the responsibility.  He made decisions which he acted upon and was a lesson that he used throughout his life.
I feel a kindred spirit from my family to Paul’s family. My family were sheep herders too. Must have been a lot of sheep.
John was a lover of horses and worked with a team and wagon. When he was sixteen, he left Kaysville and went to Hooper, living with his brother George and sister in law Mary Ann. While living there, he met a friend by the name of Adam Russell. They worked together on a horse power threshing machine for three harvest seasons. One time, they went to Ogden the day before Christmas and got a “little teed up.” Now, I will assume that means they were drunk. Ha! He was a fun Mormon.  “They returned to Hooper and went to Grandma Parker’s home and she gave them strong coffee so they would be in shape to go to the dance that night. This was when he was courting Lyd”.
Dancing was about the only amusement they had and a dance was held every Friday night. John was a good dancer and very popular on the dance floor. Music consisted of violin, mouth-organ or accordion and sometimes they used a jaws harp and a pitch fork.
John was a lover of sports, too. Adam Russell said of him, “He loved sports and liked to run foot races and horse races and play baseball. He was very popular and liked by everyone. In fact, he was a great leader and everyone respected his opinions.”
It was during this time that he lived in Hooper that he met Eliza Ann Parker. Her gracious charm and kindness to everyone appealed to him and he started dating her for dances, horseback rides and strolls in the evening after church. After a courtship which lasted about two years, they were married in Hooper, Utah. Eliza’s wedding dress was made by Mamie Williams of a tan, silky material.
The night after the wedding, they had a wedding dance (how apropos). Relatives and friends came to the dance to wish the couple well and they danced quadrilles, waltzes and two steps. Eliza’s sister Rye said of them, “They were very much in love and very happy together.”

Isn’t that wonderful? I can’t always say that about my ancestors. Not all were in wedded bliss. But it was apparent these two were in love. So sweet.
After they married, they lived with her mother and John ran the farm for his mother in law. His brother in law Adam Russell (yes, Adam married Eliza’s sister Maria) told John  he had a stable that he could have in exchange for a few days work as payment. John and Eliza fixed this up for their first home. Their first baby was a girl they named Nancy.
The summer after they moved in, John and Adam went to Nevada to put up hay for a rancher. Adam said, “We got up one morning and John said to me, “Ad, our baby is dead”. Adam made fun of him a bit for making such a remark but two hours later, the postman came and John’s remark proved to be true. There was a letter from his wife telling him that baby Nancy had died.
About a year before he’d married Eliza, John had driven a herd of cattle from Utah to Canada.

The rolling hills, the fertile soil and lush grasses together with the beautiful Rocky Mountains to the west appealed to him. After they were married, John again thought  of moving to Canada. Soon after the birth of their fourth child, Mabel, he asked Eliza if she would move with him and she said she would go anywhere he wanted to go. 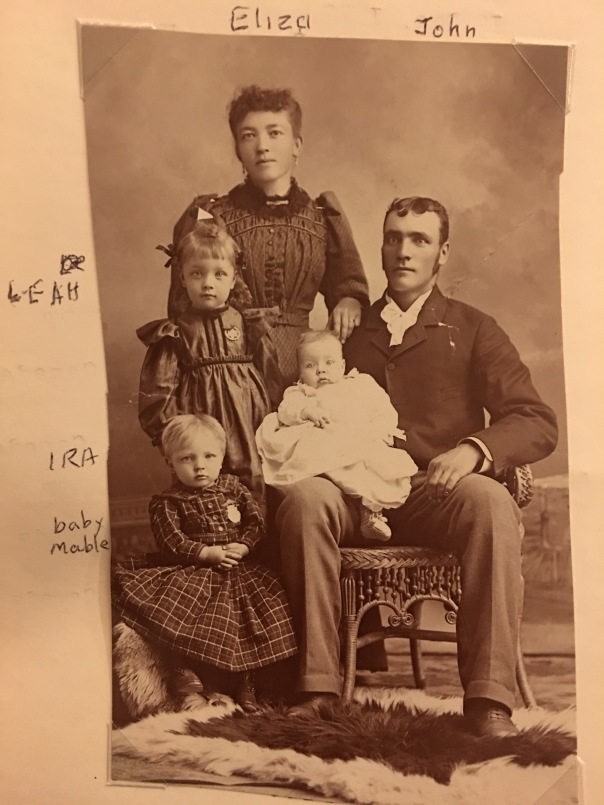 They began making plans and started out in a covered wagon with Levi Wheeler. Levi was married to Lovisa, John’s sister. Lovisa was a very dear friend to Eliza. They left in September of 1898 and traveled to Camas, Idaho where they stayed for the winter with relatives. Early the next spring, they set out again over the long weary miles to the Canadian border.  After their arrival in Cardston they took up homesteads on land southwest of Kimball. 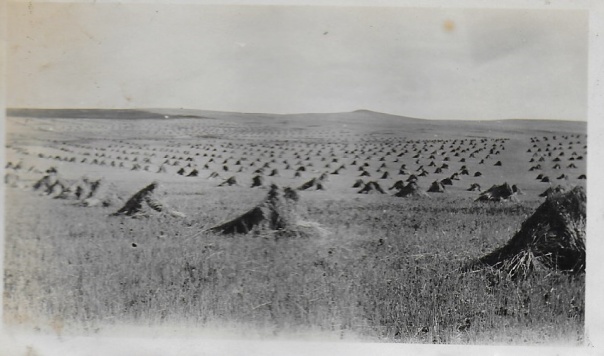 John arrived in his wagon with his wife, family and $10 in his pocket. They lived in the covered wagon the first year while preparing the virgin sod for planting their crop of wheat.
That summer, they collected enough logs to build a one room home. The nearest center to purchase supplies was 14 miles away so trips were rare. Money was scarce so purchased items were done by exchange.

Soon they moved to the Kimball Valley, closer to a school and church. In June, 1900 their first Canadian child was born, Zelma and 1902 baby Marlin arrived. Then, 1904 was the arrival of baby William George, named for his grandfathers but the tragedy of Eliza’s death arrived as well.

After the death of Eliza, John had a difficult time. She was the love of his life and he was left with six children under the age of 9. Family and friends helped him until he was able to locate a woman to come in and help care for his family. Her name was Jane Powell Empey. She had two daughters from a previous marriage. They eventually married and had six more children.

John goes on to be a leading citizen of his town, well respected and profitable. William George comes to love his step-mother Jane and she treated him very well. That is comforting to me. He really loved her and while a step-parent has a difficult job, to know that Jane was able to come in and care for and love those children of Eliza’s is nice to think about. The fact that Grandpa Bill loved her so much shows her character too.
This is just the beginning of John’s story, but what a great legacy of John and Eliza’s love. 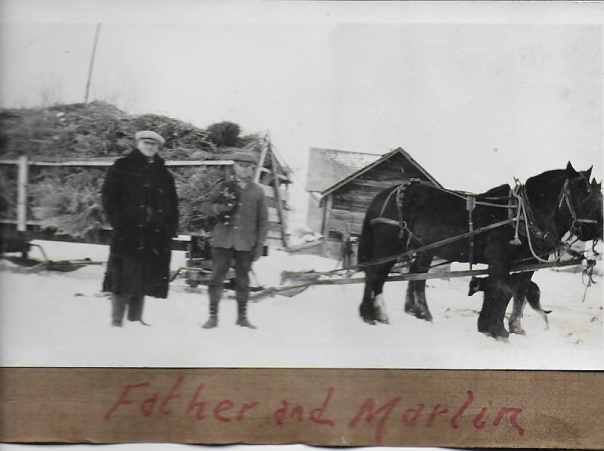 Paul’s Grandfather Bill not only kept written biographies of his ancestors, he also kept numerous photographs. We are so lucky we can weave his words and photographs to give a complex picture of his history. I, for one, am grateful my children will have such a significant amount of knowledge of their ancestors.