Well, I know I have done a post on Juan Nepomuceno Jaquez before but I have a few things to add. The first is this: 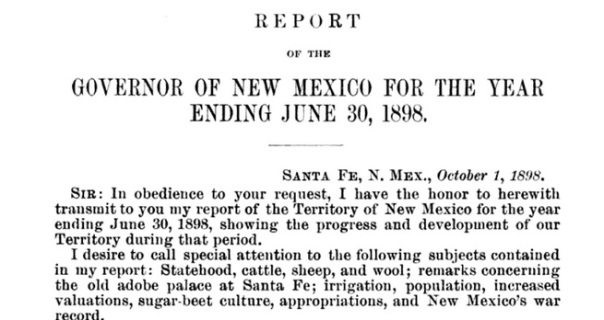 I ran across this record and thought it was something my kids should know. His occupation listed on the census is farmer. When I think of a farmer, I think of someone who has a “midwest” attitude and mindset. But I don’t think Juan N. was that kind of farmer. I think he was very much a politician, a family man and in fact I think he is exactly how our fathers turned into the loving family men that they did.

So, Juan N. is in the farthest row on the right, second picture down. My father was so proud of this picture. He had it framed and it hung in our house for years. My father had great respect and admiration for Juan N. We went to the New Mexico Legislature building in Santa Fe, just so my dad could show us where the legislature met.

Here is a piece of legislature introduced by Juan N. to keep animals from running loose in the streets. So he liked an orderly town, clearly.

And here is the listing for the House of Representatives.

While I was researching him, I ran across a book titled, “La Plata, Tri-cultural Traditions in the Upper San Juan Basin” written by Frederic B Wildfang. There is a chapter in this book entitled “Cattlewoman of the Year, Stella Montoya”. If you remember, Stella Montoya is Uncle Onofre’s daughter. I was scanning the chapter about her when I ran across this picture.

I thought hot damn, I’ve never seen this picture before.  So there isn’t a lot of detail on the picture itself but I believe the back row is Aunt Celia, Aunt Lucy, Aunt Sara, Aunt Josephine and I am not certain who is the last in the row. The article does point out Aunt Sara and knowing she is the oldest, it makes sense. In the bottom row, Uncle Simon, Grandpa Celestino, Uncle Bert and Uncle Onofre. As near as I can tell, this is taken in close proximity to when Uncle Onofre went into WWI so this is probably close to 1915. I have ordered the book and can’t wait to read it.

Speaking of his children, I had a picture that I wasn’t sure who it was although I knew it was Juan N.

Love how her arm is thrown around her father. So, this is Juan N. Celia, Edna, Effie and Fred Herrera. I wasn’t positive until I saw that my cousin had posted the names on that picture and looking at baby  Effie I thought, that is probably very accurate. So I think this is from approximately 1929 as Effie was born in 1928.

I think Juan N was very much a family man. The pictures of his 50th wedding anniversary  below show a man who surrounded by his children and grandchildren. 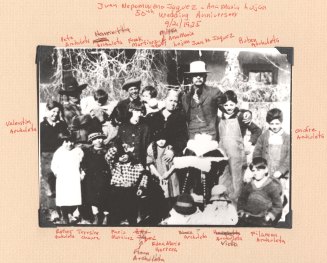 I ran across a writing on my cousin Joey Telena’s Ancestry account. It was from Aunt Flora and she was talking about her life. Aunt Flora was the daughter of my Great Aunt Josephine who passed away in 1929 when Aunt Flora was 13.

It is so wonderful to have her words about her grandfather. Those words mean so much to me. He went to check on his grandchildren every day after his daughter died, making sure Aunt Flora had what she needed to take care of her brothers. I love how they called him old man Jacquez! Haha, so funny.

Speaking of Jacquez, our last name has undergone so many changes. When I found Eusequio, Juan N’s father, on the 1870 census, it is spelled Jacquez. When I find Juan N. on the 1900 Census, Juan N’s last name is spelled Jaquez, no letter C. My birth certificate is spelled Jacquez but my dad had his name changed to Jacques when I was young and so I spelled my son’s name that way too. I guess no matter what way you spell it, you can’t hide great genes!