“The history that we share makes us who we are” Not my words, but those are the words of Dr. Henry Louis Gates, Harvard Professor and the host of Finding Your Roots. When I began researching my history, I had some preconceived notions about who I was, where my parents came from, their parents and so on, formed from stories and information shared over the years. After both my parents were gone, I was continuing my research when I came across information for one of my ancestors. As I have spoken a lot about Richard Adkins, it’s time to delve into his wife, Sallie Adkins.

One of the stories that was well known to me (as the article hung on our hallway at home for years) was a story of how my grandmother was set to become a millionaire at the tender age of 19. Big impact, right? How come we’re not millionaires, Grandma? My grandmother always said that they were duped out of the money by unscrupulous lawyers and people paid to say they were descendants of her great-grandfather, James Ashworth.

Flora’s great-uncle knocked on her door at midnight, about a month after she had married Charles Hardin, to tell her she was one of 21 people who had a right to share in money from an oil well. When I asked my grandma if she had gotten any money from it, she said she had received some, but not what they were supposed to. She said that her ancestor had gone by the name Smith and that lawyers brought forth a ton of people by the name Smith and that they ended up losing out on a lot of money. Now, my grandmother made a lot of money in her lifetime but she had done it the hard way, by old fashioned elbow grease. No heiress stuff for us.

While I was working on Ancestry.com’s website, I came across information for the Ashworth family. I added it to my tree until I opened up the 1860 Census and found a listing for Sarah Ashworth. I started reading the contents of the Census, thrilled until I came to the part where it listed her race. The word Mulatto shocked me. What? Oh, that can’t possibly be my ancestor, I thought. I don’t understand why those people think this is my ancestor but they must be wrong. It’s a mistake, I said to myself, and promptly erased that information off my tree. After all, when Richard Adkins talked about his wife, he very plainly says he was married to a white woman. It was in his testimony. Willa Adkins, too, plainly testified that she was married to a white man (she was) and that her mother was a white woman.

About a month later, I came across a document that I couldn’t deny. Well, I’ll be a monkey’s uncle (old term, I know) but it was the document showing who was included in the settlement for the Ashworth oil fortune. 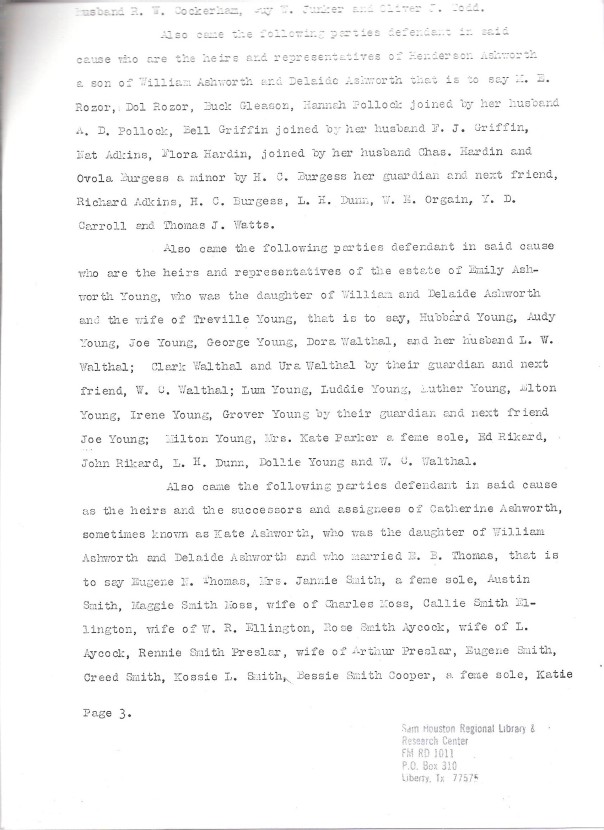 There in big letters was Flora Burgess Hardin, Ovola Burgess, Henry Carter Burgess, Richard Adkins and Nat Adkins. Well, what do you know about that? Guess it was time to add her back onto my tree. I was so fortunate because once again, I found an ancestor with a crazy story and lots of press about it. People have used my ancestor’s story for the topic of a thesis on race relations of the 1850s. Well, there it is.

So, this ancestor, my Grandma Flora’s grandmother, Sallie Adkins, was born to a family who were considered Free People of Color in Orange County, Texas a time that was fraught with violence, hatred and outright racism. Because they lived on the border of Orange County, Texas and Calcasieu, Louisiana, the family slipped back and forth between the two states. If you have time, look up the Orange County wars. If you don’t, I will give you a modified version next week.

The only other person to reach adulthood is Sarah’s sister Hannah. Sarah Ashworth at one point becomes Sarah  Smith and by the time she marries Richard Adkins her name is Sallie Adkins. Impossible to tell if Richard Adkins knew of her background, knew of her family history.  They are married by a Chickasaw minister in 1873, she bears five children and in 1900 they are living in the Choctaw Nation. Her sister’s name is Hannah but in some documents she is named Joanna Smith. She also lived in the Choctaw Nation in 1900. It appears that the only two siblings left stayed in touch throughout their lives. Hannah was born the same year her father was hung as an accomplice to murder. 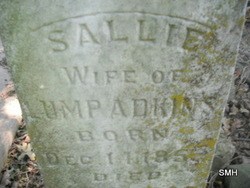 I don’t have any pictures of her so I can’t judge for myself what race she might have been. But, what I do have is my blood. I had a DNA test completed about four months ago. This is what the results looked like:

So, I do know that Sallie Ashworth’s great grandmother was Keziah Dial/Dyle and that she was Native American. I wonder if the line that shows Palestinian or Bedouin could be attributed to her. I did find a picture of some of Henderson Ashworth’s nieces and nephews.